Greg Norman comes on my T.V. screen telling me he’s picked up 15 yards with his recent driver change. If you’re like me, your first reaction is, “Yeah, right.” Having tested some of MacGregor’s newest club offerings of late, I knew they had made great strides in their recent product offerings. Even still, it was going to take some convincing before I believed what good ‘ol Greg was telling me. I’m not getting any younger myself, and extra yardage by virtue of nothing but a club change is more alluring all the time. So I set out to demo the MacTec NVG2 with an open, -albeit skeptical, mindset.

Ball one: Wow. Ball two: Double Wow. There was no mistaking it- the NVG2 is hot! There must be something to this “Cupface 360” design. MacGregor produces the NVG2 without any weld lines on the face, but rather, welding an entire cup-shaped face piece to the body of the driver head. MacGregor states this creates a larger effective sweet spot, and overall hotter face. This was readily apparent during several range sessions and rounds with the NVG2. The amount of ball speed that it produced with just my usual swing efforts was really impressive. The face feels like a giant titanium trampoline. The sound is fairly loud, but it has a hot feel and “sound” (if a sound can be “hot.”) There is a distinct “plink” at impact that is pleasing overall. It’s slightly hollow in sound, but I have certainly hit louder drivers. The face of the NVG2 I found was also very easy to aim. It does not have a lot of bulge and roll, and the fairly flat dimensions lend themselves to ease in aiming.

The face of the MacTec NVG2 is just slightly closed. This, along with a head weighting design that is draw enhancing in nature, did just that- draw the ball. It was a small draw, and quite predictable. The NVG2 is very straight-hitting overall, with a high launch angle that is easy to elevate. The stability of the head was very impressive. MacGregor uses various fixed tungsten weights at the perimeter of the head to shift the center of gravity low and back for a high launch, low spin ball flight. The design of the NVG2 head will be a great fit for those that desire a small draw for their drives, or those who fight a small slice/fade. Unlike other draw enhancing driver head designs, the NVG2 is not overly hook-prone. It helps, but is never overbearing in nature. My test club was a 10.5º loft. Even though I don’t hit an overly high ball typically, I found it launched quite high. Some of that may be the shaft. Bottom line: find a demo or a launch monitor to aid in getting the right fit. It would seem this head/shaft combo is very easy to elevate, and you might actually find yourself going down in loft.

The shaft of the MacTec NVG2 is a proprietary design produced by Fujikura, and was very smooth and lively in feel. At 60 grams, it is a lightweight shaft. But overall, it felt fairly stable, was very easy to load, and provided a good amount of “kick” through the impact zone. MacGregor uses what they call “Quadra Action” technology in the shaft design, which is supposed to load and unload at various points in the swing to better release your swing’s energy. It seems to be a higher-launching shaft, yet it did not tend to “snap” through the impact zone and cause hooking. It was a nice surprise, and one of the smoothest stock shafts I’ve had the pleasure of hitting in some time. In the time of rampant shaft swapping/upgrading, this is one stock shaft you might want to spend some time with. You might just find you’re perfectly satisfied with the stock shaft. 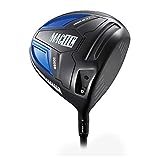 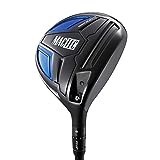 The finish of the MacTec NVG2 is a little busy, but overall, good looking and interesting if nothing else. The head is finished with what I would describe as a “black cherry” paint scheme that is dark and rich looking. The visible fixed weights are a little over the top, but I suppose MacGregor wants you to know they’re there so you feel like you’re getting your money’s worth. The top of the head is void of any alignment aids, which is a welcome design cue, as from address is quite clean and actually borders on traditional in looks. This contrast of simplicity at address and highly technical and stylized from the rear and sole is pulled off well.

What is not pulled off well is the headcover. It is big, stiff, loud, and a struggle to use. It has a zippered closure, which I found to be a pain. There is also silver reflective piping all over the place. It’s a gaudy, reflective nightmare. The restrain exhibited in the design of the clubhead unfortunately didn’t transition into the cover design. It’s just a cover, but it’s seriously lacking in the “ease of use” category. This is unfortunate, because it would appear MacGregor probably spends more on this design than many manufacturers do on their headcovers.

The stock grip is a proprietary “soft cord” design. It was quite soft indeed, and provided good traction, even in humid conditions. It is complete with hand placement graphics and traction pattern for the left thumb area. Decent as far as stock grips go. MacGregor uses a Golf Pride New Decade Multi-Compound on the “tour” version of their NVG2 driver. It would have been nice to see that same grip used on the NVG2.

Well, I have to admit, good ‘ol Greg Norman wasn’t pulling my leg after all. The MacGregor Mactec NVG2 is one hot-faced driver! Everything from the hot “Cupface 360” face design, to the “Quadra Action” Fujikura shaft was a pleasant surprise. The look of the NVG2 may be a little different, but the design is all function in nature, with unique style being an overall pleasant by-product. The consistent ball flight, along with the NVG2’s ample forgiveness, makes this driver suitable for all ability levels. Distance came effortlessly and predictably. For those who seek a more neutral ball flight, rather than a draw, MacGregor offers their NVG2 “Tour” model. But for the majority of golfers who appreciate a straight ball flight with a little anti-slice help thrown in, the MacTec NVG2 is a great choice. MacGregor has made a big push in the right direction with their newest club offerings, and the NVG2 is in keeping with this new dedication to quality and performance. Don’t overlook MacGregor when driver shopping. This could be the “sleeper” of the season.