A few months ago, a friend that I golf with all of the time bought a new set of Cleveland irons and needed my help tweaking his game, so we hit the links. The net effect of this outing was a renewed interest in what I’d been thinking for quite some time – I also need new irons. I bought my last set of irons (Titlest DCI’s) when I worked at a country club pro shop during my college years, roughly 10 years or so ago. Back then, I hit every club that came through the pro shop door, including the MacGregor VIP blades. I loved the short iron blades (8-PW), but not the long irons (3-6). I was and still am a decent player with a handicap of about 13, but I still felt that I needed the help of the cavity back on the long irons, so I bought the Titlest DCI’s. Well, now I have the bug again to buy a new set of irons thanks to my buddy.

Due partly to this bug, and some free time at work, I started checking out what MacGregor has been up to for the last 10 years. To my surprise they are now offering what they call the mixed set. The mixed set consists of 3-6 irons that are cavity back mixed with 7-PW irons that are muscle-back (blade). Being a frequent visitor and contributor to this site, I talked to the guys here at the NassaWango offices about the possibility of securing a set for review. They, in turn, spoke with MacGregor and we had a set sent to us to play with for a few weeks.

The first thing that you notice out of the box is that these are one of the prettiest sets of clubs you have ever seen. One of the other reviewers here at Nassawango has a soft spot for rifled shafts, so he was hooked immediately. The 1025 CM set looks great in the bag, and I even had a few people comment about them at the course. 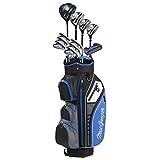 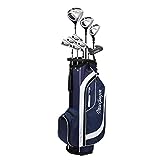 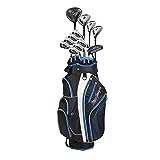 After unpacking and bagging the clubs, I headed to my local driving range to start my evaluation. I did this to gauge my distance and shot shaping abilities with the new set compared to my current irons. I found that the long irons (3-6) were very forgiving on a miss-hit. I also found that my ball traveled about 5 to 10 yards farther than my current irons. Next, I started to hit the short irons (7-PW), and noticed a similar forgiving quality to the long irons. I found this particularly odd since I was hitting a muscle-back club. To be honest, I was expecting to feel the shock of the miss-hit, and the ball to travel significantly shorter than with the Titleist irons I’ve been playing. This just simply did not happen. To say the least I was impressed.

You can only learn so much from range performance, though, so I took these irons on the road to my local course where the real test would begin. Right from the start I knew I was going to like these irons. From the first tee, I hit my drive in the deep rough, and had to hack an 8 iron to the green. The ball flew true and to the surprise of my fellow golfers, I landed the shot on the green. From there it only got better. On the first par 3, I was 2 ½ inches from my first hole-in-one. I have often come close, but this is the closest ever. I hit the long irons well, and the short irons with a great deal of accuracy.

I love the feel of the forged clubs, and the touch gained with the muscle-back short irons. The clubs are very easy to control for all types of different shots. I was able to spin the ball easily, sometimes without even trying. I felt like the ball flew higher off of the club especially with the long irons, and I believe that is where I gained the extra distance. It is really hard for me to compare these clubs to others, because there really is no comparison. The only thing that might come close is if you get the opportunity to try a set of Hogan Apex Edge Pros, but I prefer the look and feel of the MacGregor club to that of the Hogan iron. MacGregor took the best of both worlds and combined them into one set of irons. Bravo!

No review is complete, however, without a suggestion or two for improvement. Unfortunately (or fortunately, whichever you prefer) I am only able to offer one. Keep in mind I’m no Tiger Woods, of course, but if I could change one thing about this MacGregor set it would be the standard grip that is on these clubs. If you are buying a high end set of irons you should get at least a corded grip. Other than that they are perfect.

Since I am in the market for a new set, I can tell you the 1025 CM set from MacGregor is at the top of my list. I love the attention to detail that MacGregor has shown their new line of clubs, including the opportunity for customizing your set of irons to meet your type of play. This along with the speedy service that MacGregor is famous for, and the high quality product backed by the MacGregor name are enough for me to be sold on the 1025 CM irons.