It’s always fun to demo some of the new clubs when they come out. Demoing the new Cobra S3 driver was one of my more favorite demo tests in a long time. The reason is pretty simple. The new Cobra S3 is one of the nicest new drivers to come along in recent years, and it has just enough adjustment features to make it a good design without going overboard.

The only adjustment with this driver is the adjustment of the face angle of the club. There are three positions that you can use for the alignment of the shaft in the head. Each adjustment is worth 1.5* of face angle adjustment. With the 8.58 version of the driver, the face is 1.5*s OPEN when the shaft is set in the Neutral position. In the Open position, the face is opened up to 3.0*’s open. With the shaft set to the Closed position, the face is set Square. In the 9.5*, 10.5* and 11.5* models of the S3, the head is Square with the shaft set in the Neutral position, and you can open or close it 1.5*’s either way from this square setting. Because the 8.5* driver is designed for the more advanced or tour pro golfers, it is designed to play more open than the other 3 lofts. This is because tour pros don’t have a problem with hitting a slice, which is what a closed face on a driver is designed to compensate for. If you are one of those golfer that fights a slice, you don’t want to get the 8.5* driver as you will not be very happy with it as you will be hitting a big slice more often than not. Changing the face angle with the Cobra S3 is about as easy as it can get. The driver comes with a simple racket type Tee wrench to loosen the screw holding the shaft in the head. The shaft has an adapter on it that fits into the hosel of the head. Both the adaptor and the hosel have three matching cutout, that only allow the adaptor to fit into the hosel in one of three ways. Each position is clearly marked with the letters “O”, “N”, and “C”. A corresponding arrow is marked on the hosel so show you how to align the shaft for the face angle you desire. Once you have the shaft in the position you want, all you do is tighten the screw with the wrench until you feel the racket click to indicate the shaft is properly tight. The racket feature also prevents you from over-tightening the screw. It’s really about as simple as it could be. 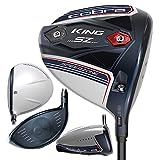 Cobra currently makes two adjustable face angle drivers. The ZL is their Zero Limits model, while the S3 is their model for the golfer that doesn’t need help with hitting the ball high enough with their drivers. Of the two models the ZL will give you a higher ball flight of the two, and is better suited to the higher handicap golfers. If you don’t have an issue with hitting your driver high enough, then I’d recommend going with the S3. The new S3 comes standard with the new Fujikura Blur TX005 shaft. Shaft weight is 65 grams for the X, S, and R flex, or 55 grams for the Lite flex shaft. If you are not happy with the standard shaft, you can custom order the S3 with a wide selection of aftermarket shafts to suit your taste and needs. I got the Cobra S3 with the standard 65 gram Blur Stiff flex shaft. One reason was that I wanted to be able to demo and review the driver the way most golfers would find it in their local golf shops. I could have custom ordered the S3 with a 75 gram shaft that would better suit my swing, but that would somewhat defeat the purpose of testing a factory built driver. I also figured that I could always install a different shaft at a later date if I wasn’t happy with the 65 gram Fujikura Blur S flex shaft.

To test the Cobra S3 I headed out to my favorite driving range to hit a large bucket of range balls. As is my practice, I started out with my wedges and worked my way up to my longer irons followed by my 5 wood to get warmed up. One of the things I’ve learned a long time ago is to NEVER demo ANY driver until I’ve warmed up with my irons. Failure to follow this procedure spells nothing but failure for my driver testing. As is also my practice, I set up my radar unit to measure my swing speed with the new driver. I do this for two reasons. One is to see what my swing speed is so I can accurately compare the distance I’m getting with the driver. The other is to see how WELL I’m swinging my woods on demo day, so I know what I should expect from my swing that day. I’d hate to report that a driver is giving me inconsistent carry yardages only to find out later that my swing speed is all over the place and the cause of my problems.

The Cobra S3 comes with the shaft set in the Neutral position, so that is the way I decide to hit it to start out. With the 8.5* head that means the face is set at 1.5 degrees open as it comes. This meant that I could expect to see a little fade for my ball flight. As it turns out that is pretty much what I got with the S3. A nice little 10 yard fade to the right most of the time. As soon as I saw that nice little fade, I decided to have my playing partner hit the Cobra as it was setup. He’s normal ball flight is a draw, that can turn into a hook if he’s not careful. We were both rather impressed to see his normal draw turn into a nice straight ball flight with the S3 set in the Neutral setting. Exactly what it should have been, and very nice to see. Set in the Open position, his normal draw turned into nice fade, something that he almost never sees with his driver. For me, my favorite setting was the Closed position, as this causes the face to be Square with the 8.5* head I was testing. With the face square, my ball flight was now a nice straight trajectory, just like I prefer. One of the really nice things about the Cobra S3 is that while it offers plenty of forgiveness when needed, it also allows the better golfer to work the ball left or right on command if he has the skill to do so. When I saw the ball flight chancing with the face angle settings, I knew working the ball was not going to be a problem with the S3.

Bottom line is that if you are looking for a really good driver that is both long off the tee, and easy to adjust for correct a hook or slice, the new Cobra S3 is one driver you should demo as soon as you can. For most golfers I would recommend one of the three higher lofted heads, not the 8.5* head that I demo-ed, as it will NOT allow most golfers to correct for a slice or fade, the most common ball flight for amateur golfer. My advice would be to demo the S# on a good launch monitor to find the correct loft needed to get the best launch angle for your game. And then to adjust the face angle to get the left or right ball flight that you want from your driver. For me, I think the while the 8.5* head is working out pretty well, to be honest I think a 9.5* head would be a better fit with a little higher ball flight and a little more carry yardage for my ball speed and low backspin numbers. 8.5* loft, stiff flex shaft. Also available in 9.5*, 10.5* and 11.5* heads.