Like most golfers I look for things that will make this crazy game a little easier all the time. Problem is, not all of the products that you read about are worth buying, and some of them outright make things worse rather than easier and better. One of the items that does make playing this game a lot easier is the Check-Go Pro from Technasonic Electronics.

Not long after I took up this crazy game 9 years ago. I heard of the original Check-Go Ball Spinner from Technosonic and was curious about whether it really worked as claimed. I did a bunch of research on the ball spinner and the purpose of the whole thing. As it turns out, ball spinning is a close cousin of the much older process of Floating golf balls, used to locate the heavy side of the ball. It is claimed by those that Float golf balls that Floating allows the golfer to align the ball on the green so as to allow the ball to roll straight and more online with the cup. Some golfers have a hard time believing that Floating a golf ball can have any real effect on how it rolls, but tests have be done that show that it really does work. The extent of just how much straighter the ball rolls depends on how much out of balance the ball is. The more out of balance, the more effect you will see with ball Floating. And the same can be said for Ball Spinning using the Check-Go Pro Sweet Spot Finder. 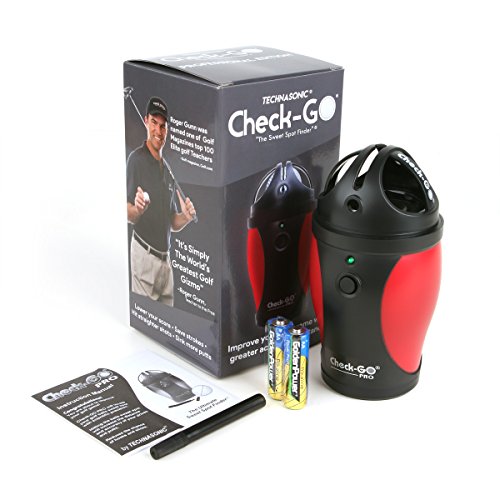 Why is it Useful

During my research on the original Check-Go ball spinner I read as many reports and test results as I could find on the subject of ball spinning. According to the test results that were published back then it had been shown to improve not only the roll of the ball on the greens, but also the flight of the ball off the tee. I idea behind ball spinning is pretty simple. First thing you have to understand is that all Golf Balls are NOT perfectly round, nor are that perfectly balanced when they come off the assembly line. This is a fact that ball Floaters have been aware of for years, and the reason ball Floating came to be used.

One of the test results covered the effects of aligning the golf ball according to the alignment line drawn on the ball during the Ball Spinning process using the Check-Go ball spinner. The test was done on a 9” pool table. They used a pool table to eliminate any effects on the ball due to any grain or imperfections in the green. The idea is that if a golf ball rolls straight on a perfectly flat and level surface of a pool table, it has a pretty good chance of doing the same thing on a green. Conversely, if a golf ball rolls OFF LINE on a pool table, it surely will do the same thing on a less perfect grass surface of a green.

This test as done by rolling 100 out of the box golf balls down a short incline that was aligned to a 4-1/4” diameter disc set at the far end of the pool table. They used a short incline or ramp, to eliminate any user error on the part of the “Golfer”. The idea was that if the ball rolled down the incline and over the white disc, it would go into a cup cut into the green. In the test, it turns out the less than 90 percent of the balls that were NOT Spin Balanced with the Check-Go, rolled over the white disc, meaning that those balls would have missed the cup had it been a real green. Even with the ramp aligned perfectly, with no Golfer error, the non aligned ball had better than a 10 percent chance of missing the cup. 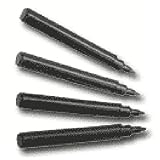 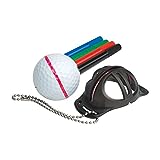 After the first round of the test, they performed the exact same test using the ball that had been Spin Balance and marked for alignment on the Check-Go ball spinner. Other than aligning the ball on the incline according to the alignment line on the ball from the spinning process, everything was exactly the same. Other than the results. This time 100 percent of the balls rolled over the white disc. Not ONE ball rolled off line when it was properly aligned on the ramp using the line drawn on the ball during the spinning process. In the test the distance from the ramp to the cup was 8 feet. This means that if a golfer were to PERFECTLY aim his putter, and make a PERFECT stroke with the right speed on the ball, he had LESS than a 90 percent chance of sinking a putt for only 8 feet. Do the same thing with a properly aligned ball that was spin balanced, and 100 percent of those 8 foot putts found the bottom of the cup. This fact alone was enough to convince me to buy a Check-Go over 8 years ago.

A second test was performed outdoors using a swing machine robot. Again, the robot was used to eliminate any chance of golfer error during the test process. In this test, instead of rolling golf balls on a pool table, they hit golf balls with a driver. The idea was to see how straight and long the balls would travel off the tee when hit with no human error. Again 100 golf balls were hit directly out of the box as half of the test, followed by another 100 balls that had been spin balanced with the Check-Go ball spinner.

Just like with the ball rolling test on the pool table, the non aligned balls didn’t do as well as the balls that were aligned on the tee according to the line drawn on it in this test the balls that were aligned on the tee according the line on the ball flew an average of 5 to 7 yards longer, and an average of 10 yards closer to the center of the fairway. What this means to the golfer is that by using the Check-Go ball spinner he or she could gain 5 to 7 yards of distance with their driver, AND hit the ball an average of 10 yards closer to the middle of the fairway. Bottom line is more distance and more fairways hit. Needless to say after reading the test results of both of these tests, a Check-Go ball spinner was on my Christmas wish list that year. Since I received the Check-Go for Christmas 8 years ago, I’ve used it to spin balance about 150 dozen new golf balls and hundreds of used balls that I’ve pick up while playing golf. I’ve had ZERO problems with it and it’s still working just fine.

The new Check-Go Pro is an improved model of the Check-Go that I’ve been using for 8 years now. I got it not because my original one died, rather so I could try the new Pro model for this review, and so I could give the original one to a playing partner so he doesn’t bother me with his ball spinning needs.

The new Pro model has a few improvements that I rather like. The base of the unit has a built in Alignment Cup that you can use to create either a partial or full line around the ball. I use it to Re-New the line on my golf balls after I’ve played a round with them to get the line back to its original condition. They also added a light that goes for Blinking to steady ON when the ball is up to speed for marking. The unit comes with 2 AA batteries that should last for years for the average golfer.

Operation of the Check-Go Pro is simple and straight forward. You place the unit on a flat surface, remove the protective cover and set a ball on top of the spinner and replace the cover, and it’s ready to go. You then press and hold the power button the spin to ball to 10,000 RPM and wait 12 to 15 seconds for the light to stop blinking. Then you use the black marking pen that comes with the unit to mark the equator of the ball with a line, and you can add a small dot axis of rotation. After the ball stop spinning, you remove the cover, remove the ball, and it’s ready to put in play. Due to golf balls having dimples, you don’t get a complete line around the ball, as the pen doesn’t get down into the bottom of each dimple. So what I do is I complete the line around the equator my hand using the same pen, or a Sharpie. You can also use the built-in alignment cup at the base of the unit for this if you prefer. Once you have the equator line around the ball, you use this line to align the ball to your target line when putting, and to align the ball to your target when hitting off a tee.

Extra marking pens are available in a four color set, or individually. Since I’m marking balls for my wife as well as others, I use different colored pens, RED for myself, BLUE for my wife, and either black or green for others. For information or to order a Check-Go or Check Go Pro, contact Technasonic Electronics. Website site is www.technasonic.com. Selling price for the Check-Go is $24.95, and $29.95 for the Pro model. Replacement marking pens are $12.95 for the set of 4.

I highly recommend this unit to all golfers of all skill levels. My own personal testing have proven to me that my golf ball do in fact roll straighter on the greens when I use the line of the ball to aligned it to my starting line. My putting improves using the line and my confidence standing over the ball just knowing it will roll true if I do my part is hard to beat. I know you’ll find the money well spent.